HOME ABOUT US WEDNESDAY THURSDAY

The following system shall be used when any Finals match is drawn on games and sets.

(a) The pair who first won seven points shall win the match provided they lead by a margin of two points. If the score reaches six points all, the game shall be extended until this margin has been achieved.

(b) The player whose turn it is to serve shall be the server for the first point. Thereafter each player shall serve in rotation for two points, in the same order as previously in that set, until the winners of the game have been decided.

(d) Players shall change ends after every six points.

Even points served from left court. 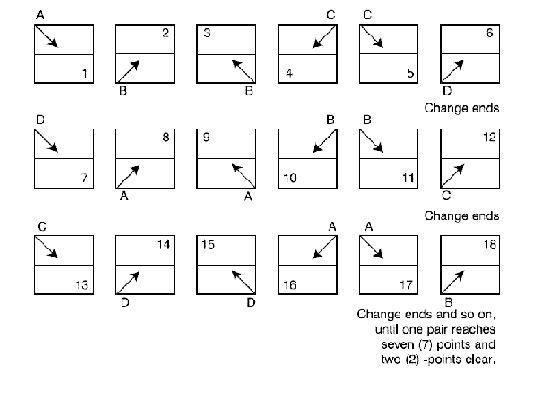 1. The first player to serve, serves only one point and thereafter every player serves two consecutive points throughout.

2. When players change ends at six points and subsequent changes, the player who serves the sixth point from the left court then serves from the right court from the other end.

3. The rotation of service must be strictly kept as throughout the set. This will mean that during part of the tie breaker players will be serving from the opposite end to that in which they served during the rest of the set.